Convention center and conference center … what’s the difference? It seems like the terms are used a bit interchangeably. Convention centers typically aren’t part of a hotel; however, there are conference centers that aren’t part of a hotel or resort complex, too. So for the purpose of this blog, the focus is on seven Colorado stand-alone convention and conference facilities that are separate from hotels; most have lodging nearby, even just steps away in some cases.

Two have expansion projects in the works, so I’ll start with Denver and Pueblo.

Colorado Convention Center, the state’s largest convention center, is situated in the heart of downtown Denver with easy access to several hotels, light rail, the 16thStreet Mall, attractions, restaurants, performing arts complexes, craft breweries and more. CCC is hard to miss with all the windows (4.5 acres of glass to be exact) and the huge Blue Bear sculpture peeking in. 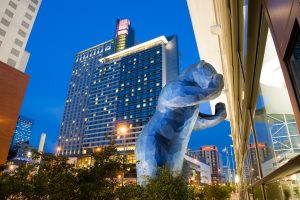 Currently CCC has 584,000 square feet of meeting and event space, including the 35,000-square-foot Four Seasons Ballroom, 50,000-square-foot Mile High Ballroom and 5,000-seat Bellco Theatre. One of my favorite features is Blue Bear Farm that produces approximately 5,000 pounds of vegetables annually and houses bee hives for honey. On the horizon is a voter-approved expansion that promises to add up to 80,000 square feet of new meeting and ballroom space, and more than 100,000 square feet of new pre-function and service areas, including a large rooftop terrace. New and improved networking spaces and technology upgrades also are part of the plan. 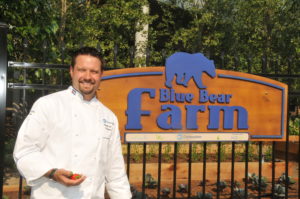 In southeast Colorado, the Pueblo Convention Center is situated near the downtown Riverwalk and is undergoing an expansion slated for completion in 2019. The Professional Bull Riders Association is moving into the new Pro Bull Rider’s Sport Performance Center being built at opposite end of the 32,000-square-foot convention center and includes 18,000 square feet of classrooms, training areas and rehabilitation space. Not only will this offer new opportunities for groups, a new 500-space parking garage is part of the project as well. 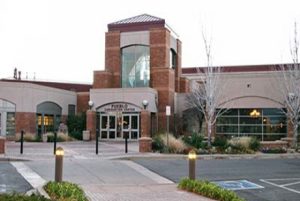 Now to the mountains! One of the best features of Copper Mountain Conference Center is its premiere ski in/ski out location at the base of American Eagle and American Flyer lifts. Large windows offer views of year-round action on the slopes and trails as well as blue sky and sunshine, and approximately 15,600 square feet of meeting and event space can accommodate up to 740 people. There are large ballroom-style rooms for large groups, as well as smaller meeting spaces and board rooms for more intimate gatherings, plus a large slopeside deck for outdoor entertaining and dining. Jack’s at Copper One is connected to the conference center and ideal for banquets, socials and aprés events. Available year-round, Jack’s is a food court in the winter and private function space in the summer.

There are three other great options in Colorado ski towns. The Telluride Convention Center in Mountain Village is a free gondola ride away from Telluride’s historic and picturesque downtown. With 20,000 square feet and capacity of up to 350 guests, it’s the smallest of the options being mentioned but certainly worthy as an outdoor plaza and meeting and event space as nearby hotels expand opportunities. 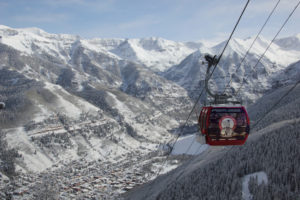 The free gondola that runs between Telluride and Mountain. Courtesy Ryan Bonneau/Telluride Tourism Board.

The Town of Snowmass Village opened Snowmass Conference Center in 1985 and sold it to the company that also purchased The Westin Snowmass Resort and Wildwood Snowmass Hotel in 2011. With hotel and condominium options just steps away, the 30,000-square-foot conference center can host groups of up to 1,000 and is built into the side of the mountain. A 900-square-foot patio provides a beautiful setting for groups to take a break from indoor meetings. Plus, it’s only a very short, free gondola ride to the new Snowmass base village development that launched in December 2018.

Keystone Conference Center is the largest convention facility in the Colorado mountains and like Copper Mountain and Snowmass offers a host of outdoor activities right outside the front and back doors. With 100,000 square feet of gathering space, including three ballrooms and 50 meeting rooms, up to 2,000 attendees can be hosted. 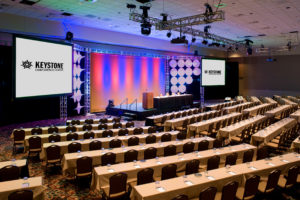 For something completely different and milder weather year-round, head to wine and orchard country on Colorado’s Western Slope. Grand Junction’s Two Rivers Convention Center has an ideal downtown location in the midst of a terrific array of unique shops, restaurants, coffee houses, night spots and more, making the 23,000-square-foot convention center a sure hit with attendees for ease of access and the surroundings. The largest space is an 18,600-square-foot ballroom. Pair the convention center, situated at one end of downtown, with the renovated Avalon Theatre at the other end for a nice venue combo. Plus, there is meeting space at the three hotels located on the same block as Two Rivers Convention Center.

Connect with on-site staff, local destination marketing organizations and hotel partners for great examples of how to best utilize these top-notch Colorado venues.